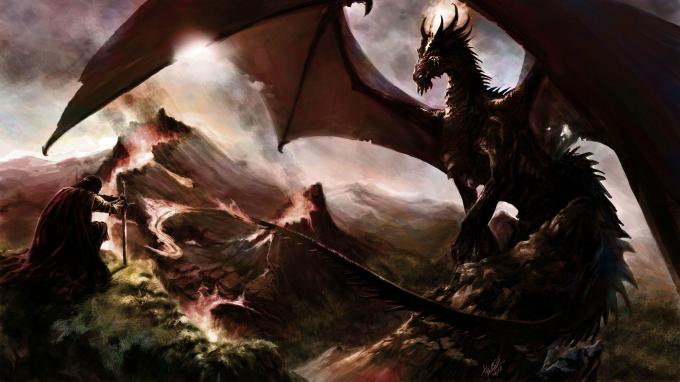 Welcome to the fourth post in the medieval England series, this is the dragons section. If you have followed the series so far you will recount Alchemy(1), Knights(2) and Wizards(3) for the previous posts. Hopefully you enjoy reading and you can of course listen to the audio version via Spotify. Thanks you and enjoy this episode.

Dragons! The most feared creatures within the land during the medieval ages. A knight or group of knights known were known as Orders of Chivalry, like the knight Templar. Those orders were sometimes called upon to slay a dragon. We have legends like St George who slayed a dragon.

The story of St George is well known to England. He successfully tamed and slayed a dragon which had both demanded and consumed human sacrifices. The dragon would extort villages of livestock and trinkets, like gold. Eventually they turned to offering humans once a year, because they simple didn’t have the livestock or jewels to give the dragon. This horrific practice continued until eventually a beloved princess was chosen as the next offering. St George rescued the princess from the dragon.

Lesser known is the slaying of the dragon by St Margaret of Antioch, who was swallowed alive by a dragon. Whilst inside she made the sign of the cross – which could have been using her sword – which caused the dragons belly and stomach to burst open! She used to be quite the revered saint in England during the medieval ages, and was associated with protecting women in childbirth. This destroying of the dragon using the sign of the cross ties into a religious idea about dragons, which is talked about further down. The story though was disputed by Jacobus de Voragine, who had written the Golden Legend which St George was a part of.

Enter another legend, Beowulf. Based on the epic poem. Not quite English and around the 6th century, a Scandinavian legend, but a brutal final attack about a dragon slaying. 50 years after defeating Grendel’s mother Beowulf slays a dragon, but is mortally wounded in battle and dies! A final courageous battle for a fearless man, one man alone who chose to fight the dragon solo. The people were fearful after his death, because they believed without him that they would be defenseless. It’s a great story and you can even watch the movie which was released in 2007 (I still remember watching this with my dad and brothers, it was a good time).

Dragons still play a significant role today in society through the various multitudes of artwork, sculptures on public display and movies. Due to the dragon being associated with religion, particularly the devil, it was said during medieval times that to see a dragon was a reminder to not sin and to be a good person, particularly when saw in church. Said to have been the tempter of Eve in the garden of Eden.

All this mythology is great, but what about something close to real? Meet the Wyverns, a common dragon in medieval heraldry. Commonly depicted in artwork. Not that these are any more real, but certainly the more common types that were known in England and Wales.

Wormhill dragons, around 700AD named by the Anglo-Saxons. The hill at Knotlow in Derbyshire (I used to live in Derbyshire) was the base or lair of the dragon. Couple them with legends like the Longwitton dragon, of Northumbrian legend. Each dragon brought bad things. No medieval village or settlement was safe with them around.

What makes dragons so scary? Well, for one they fly with their huge wings. This gives them an automatic advantage when attacking villages or castles. In order to hide from a dragon people would have had to be inside a stone building or underground. They have extremely strong scales which are akin to armour, and a lot of knights could not kill them with their swords and stronger weapons were needed like catapults or cross bows. Fire they breathe… yes the fire is death and destruction and it could rip through a village and kill everyone very quickly. Unless you had some way to appease it, and most people didn’t, then you’d be killed. They can use their huge mouths and teeth to just simply chew you up. In the Hobbit movie, Smaug is unstoppable and has been for many years, and can only really be stopped with courage and powerful weapons.

Before we end let’s look for a final time at what a dragon symbolises, among other things: psychic abilities, honesty, fearlessness, passion, magic abilities, medieval times, uncertainty, faith. The story of St George is significant to understanding exactly what a dragon was that they all saw. Below are depictions of the dragon he is supposed to have slayed, and they all resembled jurassic creatures. Could dragons of medieval times simply have been ancient dinosaurs which so happened to fly? It is not far fetched at all, it is also possible that dragons might actually be real, or were at some point in history.

Undoubtedly the biggest threat in the medieval ages after the black death, hunger and the inquisition. Although we don’t have pictures of them from the medieval ages, you can watch many films with dragons. Dragonheart – highly recommend it to see a proper dragon. Harry Potter and the Goblet of Fire, the film is dragon from start to finish. Game of Thrones of course has dragons and so many more.

Thank you for reading episode 4 – dragons – in the medieval England history series. If you liked then please like, comment, reblog and follow and as usual, have a lovely day.